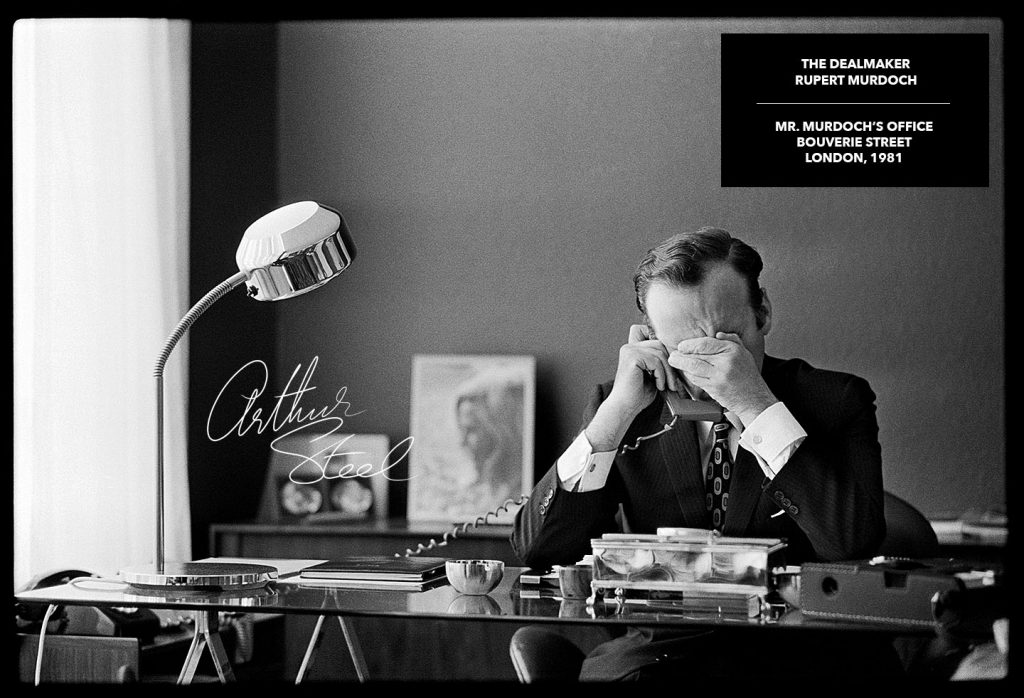 Arthur recalls: “I was invited to Mr. Murdoch’s office for a meeting and throughout the entire time his phone just did not stop ringing. So much so, I was able to quietly raise my camera and capture this photograph. He was concentrating so hard on the telephone conversation that it hadn’t registered with him that I’d taken a picture. Every picture tells a story, it’s quite clear that he must have been under immense pressure at the time.”

Camera: Leica 35mm.
Film stock: Kodak Tri-X Pan.
Location: Bouverie Street, London.
Year: 1971.
Collection: Platinum.
Print Type: Fibre-based Harman Galerie FB Digital.
Printed by: Metro Imaging.
Limited Editions:
All prints are limited editions, no further prints are produced once sold.
60″ prints / edition of 5
50″ prints / edition of 10
40″ prints / edition of 20
30″ prints / edition of 30
20″ prints / edition of 50
12″ prints / edition of 50
Bespoke: All prints are bespoke and printed to order.
Presentation: 12 and 20 inch prints are titled, numbered, signed and carefully enfolded in acid free tissue paper, supplied flat in an acid free 4mm 3-ply box for delivery and storage purposes. The boxes are ideal for gift wrapping. The larger 30, 40, 50 and 60 inch prints are also titled, numbered, signed and carefully enfolded in acid free tissue paper and inserted into a rigid 4mm thick protective cardboard tube for delivery.
Delivery: Metro Imaging based in Central London use an experienced shipping service to deliver the boxed and rolled prints. Metro take great care in ensuring the print(s) are very well protected and efficiently delivered anywhere in the UK or overseas. Acid free tissue paper protects prints from scratching/creasing. Metro also offer a vast array of delivery options to suit the recipient’s preference.
Optional Dry Mounting: Professional Dry Mounting of the larger print sizes can be arranged at an additional cost, the print would then be perfectly flat and ready for framing. However, this makes the overall size very bulky for transporting, so, it may be best for us to send a rolled print directly to your framers and let them carry out the works. You just need to make sure that they are insured as we cannot take responsibility for any damages that may occur.
Certificate of Authenticity: Each print acquired from The Arthur Steel Archive is accompanied by an individually signed Certificate of Authenticity.
Video of Authenticity: Newly printed bespoke prints are further authenticated by way of a short personalised video. Arthur Steel mentions your name on the recording prior to signing. For example, Arthur will say something like: “I’m signing this print of Rupert Murdoch, edition number 2/20 for Mr & Mrs Smith in New York.” For your records, the footage is then sent to you via email.
Watermark: Watermarks will not be present on an original print.
Copyright: © Arthur Steel / The Arthur Steel Archive.

“The world is changing very fast. Big will not beat small anymore. It will be the fast beating the slow.”

“When you’re a catalyst for change, you make enemies – and I’m proud of the ones I’ve got.”

“When I hear of something going wrong, I insist on it being put right.”

“If you’re in the media, particularly newspapers, you are in the thick of all the interesting things that are going on in a community, and I can’t imagine any other life that one would want to dedicate oneself to.”

“Great journalism will always attract readers. The words, pictures and graphics that are the stuff of journalism have to be brilliantly packaged; they must feed the mind and move the heart.”

“From the beginning on, newspapers have prospered for one reason: giving readers the news that they want.”

In the 1950s and 1960s, Murdoch acquired a number of newspapers in Australia and New Zealand, before expanding into the United Kingdom in 1969, taking over the News of the World, followed closely by The Sun. Murdoch moved to New York City in 1974, to expand into the U.S. market; however, he retained interests in Australia and Britain. In 1981, Murdoch bought The Times, his first British broadsheet, and became a naturalised U.S. citizen (and as a result, gave up Australian citizenship) in 1985 to satisfy the legal requirement for U.S. television ownership.

In 1986, keen to adopt newer electronic publishing technologies, Murdoch consolidated his UK printing operations in Wapping, causing bitter industrial disputes. Murdoch’s News Corporation acquired Twentieth Century Fox (1985), HarperCollins (1989), and The Wall Street Journal (2007). Murdoch formed the British broadcaster BSkyB in 1990, and during the 1990s expanded into Asian networks and South American television. By 2000, Murdoch’s News Corporation owned over 800 companies in more than 50 countries, with a net worth of over $5 billion.

In July 2011, Murdoch faced allegations that his companies, including the News of the World, owned by News Corporation, had been regularly hacking the phones of celebrities, royalty, and public citizens. Murdoch faced police and government investigations into bribery and corruption by the British government and FBI investigations in the U.S. On 21 July 2012, Murdoch resigned as a director of News International. On 1 July 2015, Murdoch left his post as CEO of 21st Century Fox. Murdoch and his family own both 21st Century Fox and News Corp through the Murdoch Family Trust.

In July 2016, after the resignation of Roger Ailes due to accusations of sexual harassment, Murdoch was named the acting CEO of Fox News.