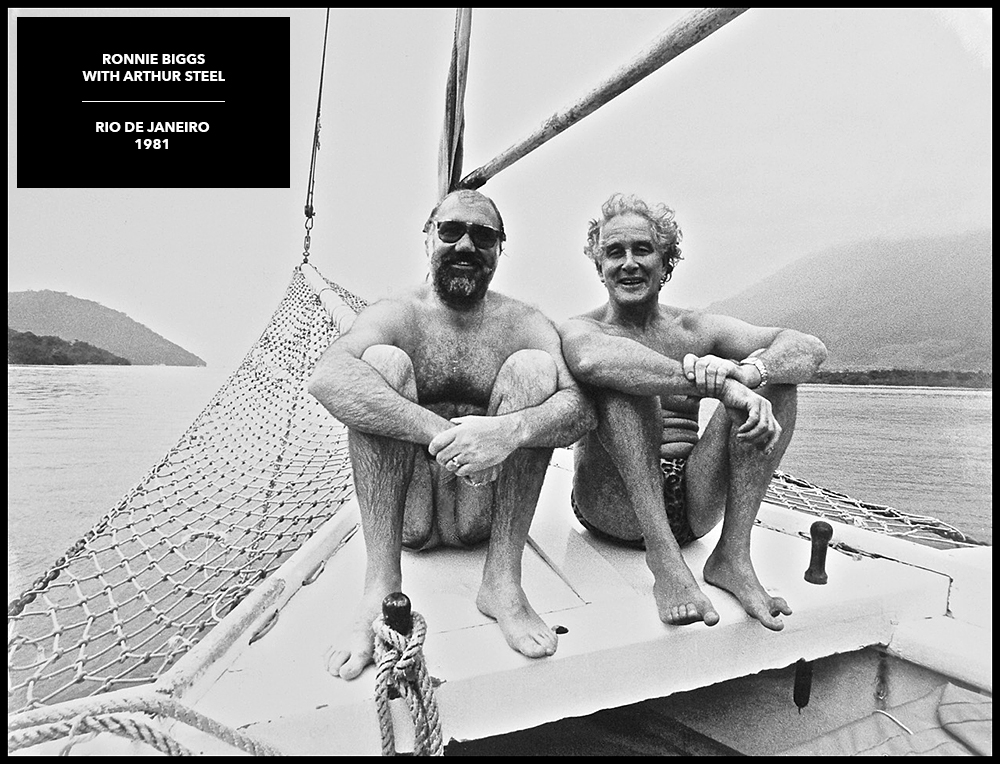 Ronnie Biggs, one of the ‘Great Train Robbers’ sitting on a merry-go-round in Rio promoting his book, ‘Ronnie Biggs: His Own Story’.

Arthur recalls: “This was a picture exclusive, the newspaper I was working with at the time were doing a special four page pull-out on Ronnie’s new book. I was flown out to Rio and before the pre-arranged meet I had half a day to scout for a suitable location, I’d never been to Brazil and had no idea where to go apart from the beach. I couldn’t believe my eyes when we drove past the fairground and just so happened to spot the miniature train. I knew it would make a fantastic picture, I just had to convince Ronnie, he couldn’t stop laughing when I showed him. The journalist that wrote the story called the piece Samba, Sex & Sorrow, hence the title.”

Camera: Leica 35mm.
Film stock:
Kodak Tri-X Pan.
Location: Rio de Janeiro, Brazil.
Year: 1981.
Collection: Gold.
Print Type: Fibre-based Harman Galerie FB Digital.
Printed by: Metro Imaging.
Limited Editions:
All prints are limited editions, no further prints are produced once sold.
50″ prints / edition of 10
40″ prints / edition of 20
30″ prints / edition of 30
20″ prints / edition of 50
12″ prints / edition of 50
Bespoke: All prints are bespoke and printed to order.
Presentation: 12 and 20 inch prints are titled, numbered, signed and carefully enfolded in acid free tissue paper, supplied flat in an acid free 4mm 3-ply box for delivery and storage purposes. The boxes are ideal for gift wrapping. The larger 30, 40, 50 and 60 inch prints are also titled, numbered, signed and carefully enfolded in acid free tissue paper and inserted into a rigid 4mm thick protective cardboard tube for delivery.
Delivery: Metro Imaging based in Central London use an experienced shipping service to deliver the boxed and rolled prints. Metro take great care in ensuring the print(s) are very well protected and efficiently delivered anywhere in the UK or overseas. Acid free tissue paper protects prints from scratching/creasing. Metro also offer a vast array of delivery options to suit the recipient’s preference.
Optional Dry Mounting: Professional Dry Mounting of the larger print sizes can be arranged at an additional cost, the print would then be perfectly flat and ready for framing. However, this makes the overall size very bulky for transporting, so, it may be best for us to send a rolled print directly to your framers and let them carry out the works. You just need to make sure that they are insured as we cannot take responsibility for any damages that may occur.
Certificate of Authenticity: Each print acquired from The Arthur Steel Archive is accompanied by an individually signed Certificate of Authenticity.
Video of Authenticity: Newly printed bespoke prints are further authenticated by way of a short personalised video. Arthur Steel mentions your name on the recording prior to signing. For example, Arthur will say something like: “I’m signing this print of Ronnie Biggs, edition number 2/20 for Mr Smith in New York.” For your records, the footage is then sent to you via email.
Watermark: Watermarks will not be present on an original print.
Copyright: © Arthur Steel / The Arthur Steel Archive.

‘There’s a difference between criminals and crooks. Crooks steal. Criminals blow some guy’s brains out. I’m a crook’

‘One report said that since my time on the run I’ve had 2,500 girlfriends. I mean you got to realize, I’ve been on the run for more than 30 years, I have got to have had more than that’

‘It has been rumoured that I was the brains of the robbery, but that was totally incorrect. I’ve been described as the tea boy, which is also incorrect’

Biography: Ronald Arthur Biggs (8 August 1929 – 18 December 2013) was an English thief, known for his role in the Great Train Robbery of 1963, for his escape from prison in 1965, for living as a fugitive for 36 years and for his various publicity stunts while in exile. In 2001, he returned to the United Kingdom and spent several years in prison, where his health rapidly declined. Biggs was released from prison on compassionate grounds in August 2009 and died in a nursing home in December 2013.