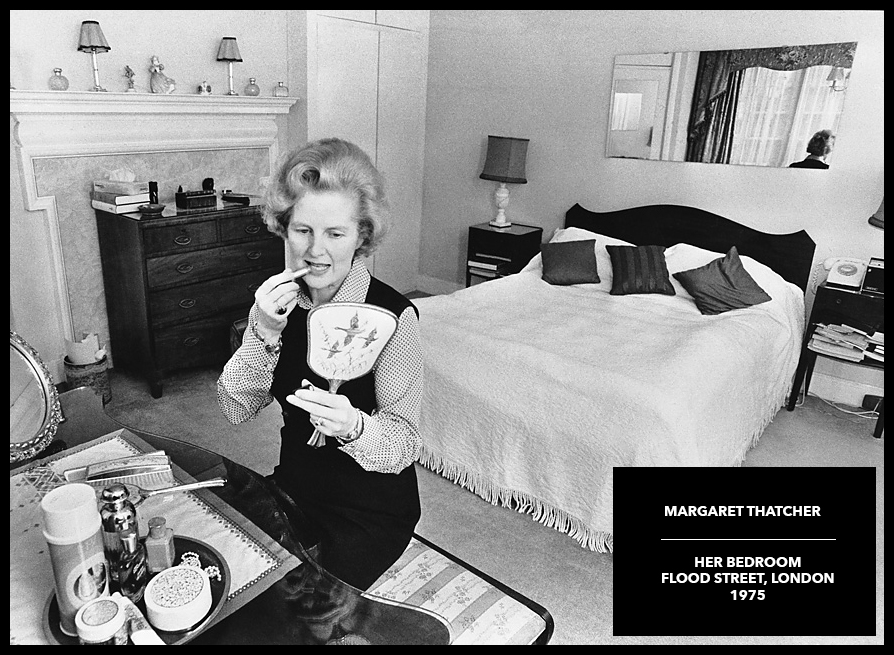 Arthur recalls: “I had the idea for a picture before I arrived, she was about to go into battle with Edward Heath and I felt that if she was photographed doing something that the rest of the nation’s women would do, it may win her some votes and so I delicately proposed the idea to her. Never in a million years did I think that she’d ever agree but incredibly she gave me full access to her bedroom and I managed to capture this rare image. It’s a shame that we weren’t shooting colour photographs at the time, as the lipstick was bright red.”

Camera: Leica 35mm.
Film stock:
Kodak Tri-X Pan.
Location: Her bedroom, Flood Street, Chelsea, London.
Year: 1975.
Collection: Platinum.
Print Type: Fibre-based Harman Galerie FB Digital.
Printed by: Metro Imaging.
Limited Editions:
All prints are limited editions, no further prints are produced once sold.
60″ prints / edition of 5
50″ prints / edition of 10
40″ prints / edition of 20
30″ prints / edition of 30
20″ prints / edition of 50
12″ prints / edition of 50
Bespoke: All prints are bespoke and printed to order.
Presentation: 12 and 20 inch prints are titled, numbered, signed and carefully enfolded in acid free tissue paper, supplied flat in an acid free 4mm 3-ply box for delivery and storage purposes. The boxes are ideal for gift wrapping. The larger 30, 40, 50 and 60 inch prints are also titled, numbered, signed and carefully enfolded in acid free tissue paper and inserted into a rigid 4mm thick protective cardboard tube for delivery.
Delivery: Metro Imaging based in Central London use an experienced shipping service to deliver the boxed and rolled prints. Metro take great care in ensuring the print(s) are very well protected and efficiently delivered anywhere in the UK or overseas. Acid free tissue paper protects prints from scratching/creasing. Metro also offer a vast array of delivery options to suit the recipient’s preference.
Optional Dry Mounting: Professional Dry Mounting of the larger print sizes can be arranged at an additional cost, the print would then be perfectly flat and ready for framing. However, this makes the overall size very bulky for transporting, so, it may be best for us to send a rolled print directly to your framers and let them carry out the works. You just need to make sure that they are insured as we cannot take responsibility for any damages that may occur.
Certificate of Authenticity: Each print acquired from The Arthur Steel Archive is accompanied by an individually signed Certificate of Authenticity.
Video of Authenticity: Newly printed bespoke prints are further authenticated by way of a short personalised video. Arthur Steel mentions your name on the recording prior to signing. For example, Arthur will say something like: “I’m signing this print of Margaret Thatcher, edition number 2/20 for Mr. Smith in New York.” For your records, the footage is then sent to you via email.
Watermark: Watermarks will not be present on an original print.
Copyright: © Arthur Steel / The Arthur Steel Archive.

‘There is no such thing as society: there are individual men and women, and there are families.’

‘The problem with socialism is that you eventually run out of other people’s money.’

‘You may have to fight a battle more than once to win it.’

‘Being powerful is like being a lady. If you have to tell people you are, you aren’t.’

‘If you set out to be liked, you would be prepared to compromise on anything at any time, and you would achieve nothing.’

‘I am extraordinarily patient, provided I get my own way in the end.’

‘To those waiting with bated breath for that favourite media catchphrase, the U-turn, I have only one thing to say: You turn if you want to. The lady’s not for turning.’

‘No-one would remember the Good Samaritan if he’d only had good intentions; he had money as well.’

‘No-one would remember the Good Samaritan if he’d only had good intentions; he had money as well.’

Biography: Margaret Hilda Thatcher, Baroness Thatcher, LG, OM, PC, FRS, FRIC (née Roberts; 13 October 1925 – 8 April 2013) was a British stateswoman and politician who was the Prime Minister of the United Kingdom from 1979 to 1990 and the Leader of the Conservative Party from 1975 to 1990. She was the longest-serving British Prime Minister of the 20th century and is currently the only woman to have held the office. A Soviet journalist dubbed her the “Iron Lady“, a nickname that became associated with her uncompromising politics and leadership style. As Prime Minister, she implemented policies that have come to be known as Thatcherism.

Originally a research chemist before becoming a barrister, Thatcher was elected Member of Parliament (MP) for Finchley in 1959. Edward Heath appointed her Secretary of State for Education and Science in his 1970 government. In 1975, Thatcher defeated Heath in the Conservative Party leadership election to become Leader of the Opposition and became the first woman to lead a major political party in the United Kingdom. She became Prime Minister after winning the 1979 general election.

On moving into 10 Downing Street, Thatcher introduced a series of political and economic initiatives intended to reverse high unemployment and Britain’s struggles in the wake of the Winter of Discontent and an ongoing recession. Her political philosophy and economic policies emphasised deregulation (particularly of the financial sector), flexible labour markets, the privatisation of state-owned companies, and reducing the power and influence of trade unions. Thatcher’s popularity during her first years in office waned amid recession and high unemployment, until the 1982 Falklands War and the recovering economy brought a resurgence of support, resulting in her re-election in 1983.

Thatcher was re-elected for a third term in 1987. During this period her support for a Community Charge (referred to as the “poll tax”) was widely unpopular, and her views on the European Community were not shared by others in her Cabinet. She resigned as Prime Minister and party leader in November 1990, after Michael Heseltine launched a challenge to her leadership. After retiring from the Commons in 1992, she was given a life peerage as Baroness Thatcher, of Kesteven in the county of Lincolnshire, which entitled her to sit in the House of Lords. After a series of small strokes in 2002, she was advised to withdraw from public speaking. Despite this, she managed to prerecord a eulogy to Ronald Reagan prior to his death, which was broadcast at his funeral in 2004. In 2013 she died of another stroke in London at the age of 87.